A Get Smart Girl’s Long Journey to Self Confidence

As a child, I lacked self confidence. I was so unsure of myself and my appearance. I was skinny, wore glasses and a brace for my spine. Every day I endured kids calling me ugly, skinny and four eyes. My childhood and teenage years were the absolute worst! Along with a lack of self confidence, I also suffered from depression. The combination of those two things were too much to bear. There were times where I just wanted to give up and leave the world behind. But now that I look back over that chapter of my life, I see that I am a living testimony that anything is possible.

In my thirty-one years of life, I have learned numerous valuable lessons. People have tried to impose their thoughts and opinions of who I should be. In my early twenties, I tried living my life according to how other people thought I should, but it became too much. I was miserable with who I became and people still weren’t happy with me. This caused me to sink into a deeper depression, but this time was different. I was five months pregnant with my first child.

The day I was told I was having a little boy was the day that things became so real for me. I was about to be a mom; I was about to be responsible for someone else’s life. It was then that I decided I had to change my life. Living the way I was, I knew I was going to soon self destruct. 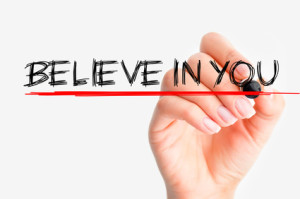 Gaining self confidence is a long and hard process and it does not happen over night. I have been in therapy for four years and I learned the hard way that everyone is not going to accept everything I do and say. But that’s ok! It’s ok to be different. It is ok to be who you want to be. It’s ok to say no. People pleasing  has done nothing but drained and sucked the life out of me. You can’t please everyone!

Over the years, I have accomplished many things. I still struggle with self esteem and confidence but it isn’t as bad as it was back then. I now have a husband and children who celebrate my achievements. I didn’t have that back then. I looked for people to validate me, and I was disappointed when they didn’t. But now I have my cheerleading squad at home and I know they will cheer for me for everything I do.

One piece of advice that I have for young girls is to never let anyone tell you who to be. In life we have to accept that people disappoint and hurt us. You have to be your number one supporter. It’s ok to cry. It’s ok to feel disappointment. It’s not ok to let someone else make you miserable.

About the Author: Sheri Henry-Harrigan

Sheri Henry-Harrigan is a mom, wife and a student who lives in New York City. She holds a Bachelor’s degree from John Jay College and is now attend Full Sail University for a Master’s Degree. Battling depression at a young age she took a pen to a pad and wrote her thoughts and feelings out. She kept her writing to herself until 2012 when she published her first book. Sheri is a published author of two books under her own publishing company. Her passion for writing has helped her to create unique opportunities for herself in publishing. Sheri’s main goal in life is to help people whenever she can. She hopes through her writing that people can relate and identify with her. She desires to be an inspiration to someone. After wonder for years what her purpose was in life she finally figured it out. She was called to uplift and motivate people through her words and writing. She is ready for the job she feel she is called to do. The two things she loves to do, write and help people have made her life worthwhile.