Whether you’re living with one, two, or three other people, living with someone else can be exciting…and challenging. Because everyone’s living situation is different, I thought I’d share my own experiences and the things I learned from them.

My freshman year, I lived with two different girls because my first roommate transferred after our first semester. This was the first time I’d ever had to share a room with someone else and it definitely wasn’t easy being confined to such a small space. During the year I learned that one of the most important tools was communication…especially in times of conflict. If something is bothering you, speak up. If you want to do something together, say so! Be mindful of each other’s feelings when speaking to each other. I’ve found that a situation has always resolved in the best possible way by speaking to my roommate politely, as if I were talking to a professor or someone with authority. It shows respect and your roommate will be more likely to reciprocate that.

I lived with two girls my sophomore year in an apartment-style dorm. Things got a little easier because we had our own bedrooms, but we now had a full kitchen and living area to maintain. We all quickly realized the importance of sharing responsibility and being clean in the common areas so we wouldn’t inconvenience anyone else.

My junior year, I lived with my best friend Courtney and two other girls. This was probably the best year of my “dorm life experience”. The best part of living with a friend is that you always have someone to be silly with, and when conflicts arise, it’s that much easier to resolve because you’re already comfortable with each other. The best part about living with Courtney was that we would always do things together, and even if it was meaningless, it was always fun. We got frozen yogurt when it was freezing outside and would sit in her car with the heat blasting, run errands and sing together, and we made each other laugh until we cried. Even if you’re not living with a friend, doing things outside of your dorm with your roommate(s) is a great way to get to know each other better and strengthen your friendship. 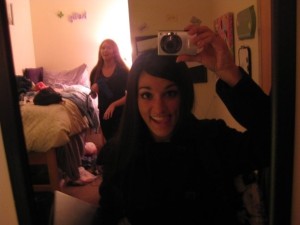 This was after one of our adventures outside. It was freezing, so Courtney decided to take pictures while I blow-dried myself to warm up!

Everyone’s experience will be different. Some people never have roommate issues, and some do. The most important thing is to remain level-headed and patient- it’s a learning experience for everyone.

Have a fun and safe Halloween, ladies!

About the Author: Kelly McPherson

Kelly graduated from Florida State University in 2012 with a Bachelor’s degree in Political Science. She currently works at a law firm in Tallahassee while preparing for graduate school; her ultimate goal is to work in the political spectrum in Washington, D.C. or in her home state of Minnesota (she still has the accent). Kelly hopes to work with Get Smart to share her experience with college-age women to inspire them to make the most of their undergraduate career. In her free time, Kelly stays involved with her university’s College of Music, both on campus and off. She also enjoys running, reading, cooking, and spending time with her friends and family. Find her on Twitter: @kelandra_