#BanBanBossy and #GetSmart about REAL Leadership

I bought into the hype of banbossy! I even mentioned the #banbossy campaign in a workshop I did with young girls last week!. After reading the Ban Bossy website I was floored by the tragic flaws that the campaign is hiding beneath the surface.

Having worked for 10 years in the presence of 800 teenage girls running service and leadership programs, I just have to weigh in on this campaign.. Its core statement says, “When a little boy asserts himself, he’s called a ‘leader’.” Yet when a little girl does the same, she risks being branded ‘bossy’.”

Stop being bossy, and you’ll stop getting called bossy. . Girls that are being bossy are not secretly being great leaders. Leadership is way to cool to mess with here to be confused with being bossy.

Why #banbossy is tragically flawed

1.  Leadership is situational. I’ve read about 7,000 pages on leadership for the past 2 years as I prepare to graduate from Columbia University with an MA in Social & Organizational Psychology. No where in these 7,000+ pages book is “bossy” or its synonyms: domineering, pushy, authoritarian, dictatorial, or controlling labeled as synonymous with highly effective leadership WITH the exception of sometimes what’s needed in a time of LIFE or DEATH such as on the battlefield or as part of a rescue relief mission OR someone is picking on the new kid and might need a little protection. Lead to the situation and the task at hand.

2.   It continues to assume only girls get hurt when acting aggressively and getting labeled. Bullying and name calling are NOT gender specific. Are we to assume that a boy never gets called a word? If  a boy pushes people around (or in his case “acts assertive”) and acts like a “jerk” or a “bully” he is most likely exhibiting BEHAVIOR that is similar to being “bossy” – meaning pushing people around trying to get what he wants in a way that is just plain, well…obnoxious. Name calling affects everyone.

3.    It was a waste of good resources. If some blogger chick in her NYC apartment thought of #banbossy no one would know about it. But the COO of Facebook can afford to get it out there to you in no time!. We need to seriously graduate women’s movements to be more grown up. Yes, the numbers of women in CEO positions are still severely trailing men. Women who got fed up playing in a man’s world starting running their own businesses. There’s nothing to compete for when we run the show. Take the money invested into the #banbossy campaign and reinvest it in young women’s entrepreneurship mentoring programs for lasting change. By the way our co-founder is a 24 year old business owner crushing it. We’d be happy to help you and we promise not to boss you around.

These statistics from the National Association of Women Business Owners speak for themselves.

4. It doesn’t answer the question “WHY DO GIRLS ACT BOSSY?” Why do girls feel the need to act domineering, controlling, and authoritarian? Bottom line, early parenting style that affects positive social and emotional development can greatly help start to increase confidence, trust, and self-regulation which won’t really require being bossy to get heard. This will make a bigger difference than banning a word. For more information on attachment theory, its connection to the social and emotional development of children and long term success (with research to back it up) please check out “How Children Succeed” by Paul Tough. (another suggested for the misuse of the resources: send all parents this book. It’s golden!)

5. It’s  probably making English teachers around the country nuts! Wait – we are banning words? What if a girl is domineering, controlling, and authoritarian? Are we then supposed to call that great leadership? “Great job! Good for you for being a dictator!” (HINT: See paragraph #1: “Leadership is Situational.” Bossy may be appropriate in a specific situation.) The whole concept of the campaign makes no literal sense and is a sweeping generalization of a topic there is gobs of research on: leadership. Period.

6. Plenty of WOMEN journalists are challenging it publicly.

7. There’s a few kids who need a voice here. Since we are now drawing attention to labeling, the shy girl, the nerdy boy, the overweight kid, the pimply boy, and the socially awkward anyone are really not keen on being pushed around. In fact if you were their friend just by being a nice kid, you’d perhaps be labeled class leader of the century. THAT is leadership. THAT makes a difference. 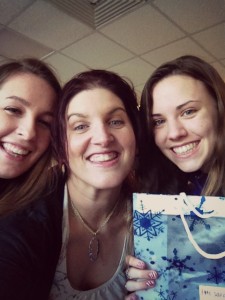 8. Being bossy has a time and place. I act bossy sometimes and for years I have felt myself doing it and forced myself to self-correct because deep down I knew I was a leader. I am (sometimes!) able to turn this around because I was responsible for  empowering hundreds of girls to be great leaders for a decade. When I was being bossy – I would name it. “Ms. Licata is about to be bossy because we are in a time crunch – or because we are in the middle of the 9th ward on a service trip in the bayou and I am responsible for your safety according to this permission slip.” Hold on there Rachel Simmons.  I am NOT apologizing for it – I am owning it and claiming it.  When I want you to serve, lead, and make a real impact I don’t need to be bossy, therefore no one will incorrectly label me as such.

Who taught me I didn’t need to be bossy to lead effectively? Teenagers. I dedicate #8 paragraph to two of the best young leaders I every worked with. They may think I trained them…but they trained me. Here’s to Amanda Carpenter and Jessica Sperber. They are both leaders; both compassionate (and sassy!) women making a difference in a world that needs assertive women who know how to do so with respect and class.

So #banbanbossy and #getsmart about real leadership instead. Use us as a resource for AUTHENTIC COMPASSIONATE LEADERSHIP? Why? Because the world just could use less people of ANY GENDER who push people around and call it “misunderstood leadership.”

We want to hear from you! Please check out our site www.banbanbossy.com.

Stay informed and #GetSmart with us!

If you think girls can be assertive without being bossy (remember it means tyrannical and domineering) we want to hear about leading with kindness and character. If we stop being bossy, we have no need to use such a term. Tell us how it feels when a girl is bossy, and why YOU want to be a different kind of leader. Read the Ban bossy site and keep in mind what it is ACTUALLY saying – that girls who are being bossy are being mislabeled for being leaders and when boys act this way they are praised. Tell us WHY this is NOT about a word but about being a great leader who treats people with respect. Apply to write for us here or send us a video at getsmartcoach@gmail.com.

About the Author: Stephanie

Stephanie Licata, M.A., ACC is the Executive Director of Get Smart Mentoring. After over a decade working with young women, she is inspired and excited to be working with so many fabulous young women all across the country to breathe life intp Get Smart. Stephanie is a seasoned personal and organizational coach and consultant. She received her professional coaching certification from NYU and the International Coaching Federation. She is also an accomplished speaker, trainer, and consultant with a Masters in Social & Organizational Psychology from Columbia University.