Empowered Women Get Smart about Guys Workplace inequality is no joke. Each day a women wakes up, she is facing a history that is bigger than all of us. Since basically the dawn of time women and men have not been on equal footing when it comes to both leadership roles and salary. While things have improved in recent decades women are faced with work inequality that is dependent on what part of our country you live in. According to this most recent article  published in the Washington Post. “The status of working women is strongest in the Northeast, the region home to many of the most-equal states by employment and earnings, according to a national analysis.” So the question is what do we do about that? (well first this may involve relocating!) Throw a tantrum? Have a rally? There are so many answers to that question and many women are standing for this equality like it’s their job and we love them for it. It’s harder to solve an age old problem than it is to create new and innovative solutions that CHANGE the GAME. 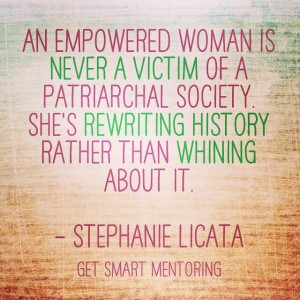 Part of why Get Smart exists is to ignite and bring forth the natural leader in each woman we reach so she can decide for herself. We create GAME changers who, instead of complaining about working in companies dominated by men, will develop themselves to be the kind of women that start companies of their own. We believe by creating young women as leaders, thought leaders, future entrepreneurs, and trailblazers, we can create that new equality we are seeking. Fighting old battles is frankly…boring. So let’s create new ones. How about an all out enthusiastic EFFORT of HEART and GRIT rather than a battle?

In order to do that we have to also be compassionate with ourselves AND be real with men. Men are not our enemies. Each man you meet should NOT be held accountable for eons of a historically patriarchal society. An empowered women has nothing to take FROM a man. She’s got it. and she ROCKS it. She can celebrate a man or women’s success EQUALLY.

A few weeks ago I was just minding my own business in a Starbucks when I noticed two young men studying very hard for what appeared to be a nursing exam. We struck up a friendly conversation and I had a little Get Smart chat with them. We talked about why they chose nursing, how they were TOTALLY going to pass, and about how I thought it was so awesome to watch two young men so committed to something. These guys weren’t out to conquer the corporate ladder (not that there is anything wrong with that!) or take a job from someone else. They GENUINELY felt called to be nurses. They put effort and energy into something they cared about. They were awesome enough to be interviewed on the spot and you just can’t imagine how inspiring they were..Watch! 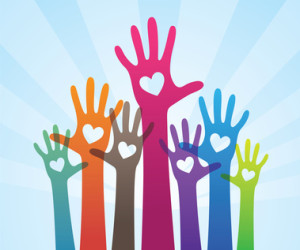 Everyone on this planet plays a role that makes our society WORK. It is our job as human beings to start taking away all of the barriers that separate us. As we dwell on our inequality, we perpetuate it. We can’t change yesterday. We CAN celebrate the women who have gotten us this far and change up the conversation to keep it interesting. Get Smart stands for a world that works for each and every person. Is this realistic? Probably not. It will probably not all happen in any of our lifetimes. This is not going to stop me or Get Smart from opening the eyes and hearts of as many people as possible. So today, just be human. That’s where we all start. Get Smart.

Get Smart, Get Inspired ~ Join the Get Smart Community!

About the Author: Stephanie

Stephanie Licata, M.A., ACC is the Executive Director of Get Smart Mentoring. After over a decade working with young women, she is inspired and excited to be working with so many fabulous young women all across the country to breathe life intp Get Smart. Stephanie is a seasoned personal and organizational coach and consultant. She received her professional coaching certification from NYU and the International Coaching Federation. She is also an accomplished speaker, trainer, and consultant with a Masters in Social & Organizational Psychology from Columbia University.