Feminism and The Great Divide

Race is hard to speak about. It’s a touchy subject that can make people feel uncomfortable. With the recent racially fueled attacks across this country, it’s important to discuss the ways that our own privilege and mindsets hold us back from being better allies. Get Smart is an amazing platform on which to challenge ourselves to expand the ways we think about ideas outside of our own experiences. Within the present feminist movement there has been resistance to accepting race as important. Sexism is terrible, that’s a given. But race cannot be absent from the conversation about sexism because, in reality, certain women are treated better or worse than others. There is a further divide and ignorance throughout feminism to the marginalizing forces of other pieces of a woman’s identity like that of sexuality, class, ability, and many more attributes. Herein lies an important lesson: feminism isn’t perfect. My discussion of race and intersectionality is not to create divides between feminists but rather to shed light on the fact that there are in fact patriarchal-like power structures manifesting within our own movement!

Why is Race Important?

Race, as a way of defining people, has been and will be important for a long time. It was first used to describe a group of people who spoke a common language or shared national affiliations. It wasn’t until the 17th century that race began to describe physical attributes. Basically, the races that we assign to people today are solely based off of social definition. Defining someone’s worth on their skin tone or texture has been built up by society.

My race is something that holds me back in more ways than one. While this isn’t an excuse to be perpetually upset at the world, I reserve the right to be angry at the injustices that have been happening to brown and black bodies. Feminists sometimes shy away from talking about race because some believe we need to focus on the issues that affect women as a whole. But here’s the thing. This country has a history of catering to certain types of people; those that are white, male, able-bodied, rich, cis-gendered, or heterosexual. Feminists who do not believe that our differences matter and need to be acknowledged are not seeing the reality of our society and the historical structures that continue to attribute to how someone is treated. When a woman of color voices her opinions on feminist platforms, she is often shushed because her problems are not everyone’s problems. This isn’t how we support and build each other up.

What is happening is a dismissal of things that are affecting fellow women. While there isn’t an immediate remedy, we can acknowledge the ways that we have all been ignoring the plight of other women simply because our issues don’t align with theirs at the present moment. It’s very easy for privileged people to fall into a routine of fighting for things that matter to them but refuse to accept that there are people who are not as privileged and are fighting for their respect and integrity in a world that keeps holding them down. To call yourself a feminist, but only be concerned with issues that affect some women or yourself, is both irresponsible and disrespectful. 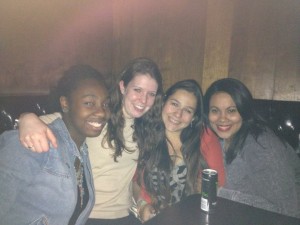 Regardless of the fact that women share the experience of being a woman, there are so many things that make our lives different. That’s the wonderful part about being individuals. In that same vein, my time on this earth as a Hispanic, heterosexual, low-income woman has been very different than some of my friends who are black, asian, white, upper class, a part of the LGBTQ community, etc. I refuse to believe that my place in this society (largely dictated by my race, gender, and socioeconomic standing) should now be ignored to move toward “equality,” when equality was never a primary goal of the privileged. It’s important for people that are privileged to understand their place in society and see that it’s easy to say race or gender shouldn’t matter when these things have not been used against you as means for prejudice and discrimination.

I’ll give you an example: Patricia Arquette gave a feminist centered acceptance speech at this year’s Oscars in which she expressed her anger at the lack of pay equality in this country. Backstage she went on to say, “And it’s time for all the women in America and all the men that love women, and all the gay people, and all the people of color that we’ve all fought for to fight for us now.” This is a prime example of someone who is extremely privileged calling upon those who are not to fight for them regardless of the pressing issues in their lives. Forget the violence that occurs on a daily basis toward “gay people” or “people of color.” She wants us to fight for her equal pay. The feminist movement was pioneered by women of color and lesbians, so I’d like to think they don’t owe Patricia Arquette anything. The stark disparities in quality of life regarding equal pay for women of color compared to white women is remarkable. Patricia Arquette attempted to use her celebrity as a way to promote her passionate opinion and I respect that. But in doing so, she isolated herself as an ignorant bystander to the issues that are directly and more heavily affecting other women not in the seat of privilege.

Many people do not want to acknowledge our intersectionality as a key part of who they are because it sheds light on past injustices and the current events that are targeting certain groups of people. It highlights that sometimes we are helpless against racism, sexism, or classism. This is not a defeated or pessimistic attitude but rather acknowledging the power structures in our society and an effort to find a missing link that will help break it down. Helping to shift the mindsets in individuals by inserting progressive thoughts is one of the ways that we can act as a practitioner of social justice change. A practitioner is someone who is able to inhabit a different consciousness and consistently acknowledge the stories and experiences of the oppressed in fluid, meaningful, and mobile ways to change the current power structure and decenter the people who remain ignorant. We cannot change anyone: it’s nearly impossible to reinvent someone to your liking without it being fabricated. However, challenging their mindset and helping them look at their privilege will manifest itself in their future actions. We have the power to change the ways that people of color have been silenced in not only society as a whole but within the feminist movement.

About the Author: Melody Estevez

Melody is an undergraduate student in her junior year studying at Pace University in NYC. She is a Psychology and Women and Gender Studies double major and is also pursuing a Non-Profit Studies minor. She hopes to become a therapist and work alongside non-profits that support young women all around the world. When she isn’t studying or working as an HTML tutor, Melody can be found baking, nerding out over Harry Potter, drinking her millionth cup of tea, or taking pictures of her cat, Magneto. She is constantly trying to expand her mind and meditates often to do so. She is excited to be a part of Get Smart and to write posts about how women are powerful and capable of amazing things.